Posted on November 19, 2020 by Curated Curiosity

“- though I walk through the valley of the shadow of death, I will fear no evil: for thou art with me.”
23rd Psalm

Since I can remember I’ve been fascinated with the concept of death. What happens after? Where do we go? I remember asking my mum that when I was 3 and scaring the hell out of her, she didn’t like me asking about such macabre topics. Later, when I was 8, my first short story was a horror mystery, the first major book set I read was “Silence of the Lambs,” by Thomas Harris. My favourite director is Tim Burton, my favourite movie “Edward Scissorhands.” Needless to say, I’ve always been slightly enchanted by the dark, the strange, the eccentric. Not so much that I would adapt such a lifestyle, but enough that I’ve wanted to dress up and pretend, study and understand the method to the madness… I’ve wanted to do a dark beauty shoot for years. After the trauma to my face, I first tried the idea with my friend Cara. It was her first time modelling, I think she nailed it. Since then I’ve been dying to model in one of my own.
Randy and I shot back in early August and have been dancing around the idea of a dark beauty shoot for quite sometime.
We teamed up with my darling designer friend, Dianne Gibson of Gibson Girl, and she made me a custom corset, skirt, cape, gloves, among other items that I didn’t have enough sunlight to shoot today (so we’ll show you those gems later).
And naturally I had my girl Tara from Fancy Fantasy to do the makeup and hair. We wanted a Spanish inspired look for the hair, so she did a fish tail across the back of my head and had curled the tails of my braid. She fixed a large flower onto the tie around my hair, it looked perfect. (And I got to give her beautiful kids the giant candy bags I made! Complete with candy bones, gummy vampire teeth, GUMMI zombies, and more!)
I also couldn’t thank Dianne enough for thinking of making a cape, it was freezing outside (as yesterday was the first snowfall of the year)
So Randy and I went to St.Mary’s Cemetery, the second oldest in Calgary and also Catholic. I wanted the catholic motif as it brings a very religious feel.
In case anyone was wondering, we shot this at the very back of the graveyard at the back of the last grave. Even so Randy still cursed me and is certain we’re going to Hell. I said my prayers before going an after so here’s hoping God is lenient, after all, he created us in his image, he must like beauty.
Here’s the first 2 shots from the series, for more stay tuned to my photographers page at
https://www.facebook.com/RandyPorterPhotography 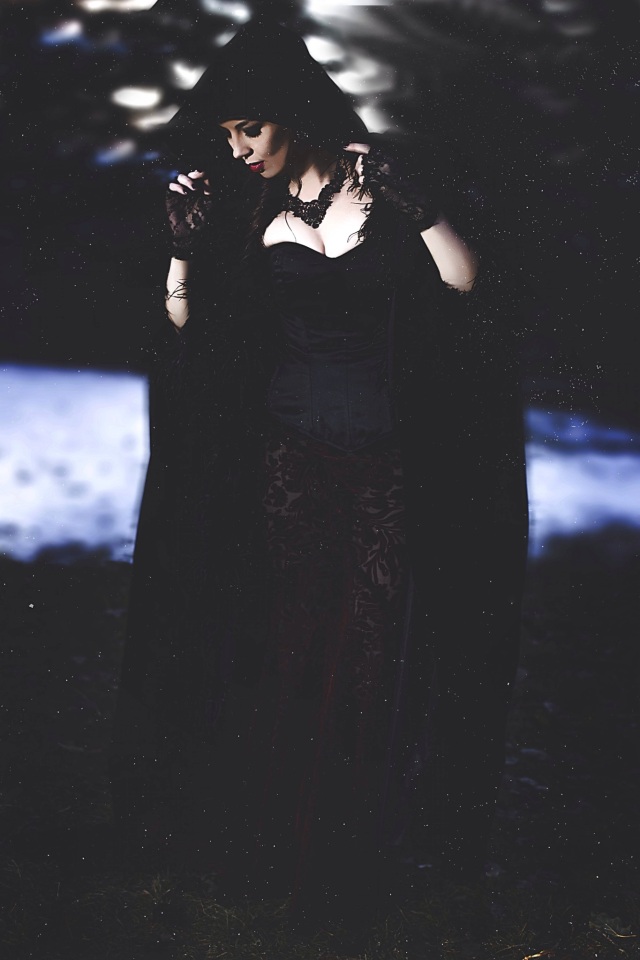